Glaucoma is a serious eye condition characterized by an increase in pressure within the eyeball, called intraocular pressure. It is similar to high blood pressure in the body. The condition is therefore also known as “hypertension of the eye.”

A certain amount of intraocular pressure is considered necessary, but too much can cause damage to the eye and may result in vision loss. Glaucoma is the major cause of blindness among adults today. One out of every eight blind people is a victim of glaucoma. Far-sighted people are more likely than near-sighted people to develop this disease.

The first symptom of glaucoma is the appearance of halos, or colored rings, around distant objects when seen at night. In this condition, the iris is usually pushed forward, and the patient often complains of constant pain in the region of the brow, near the temples, and in the cheeks. Headaches are not uncommon. 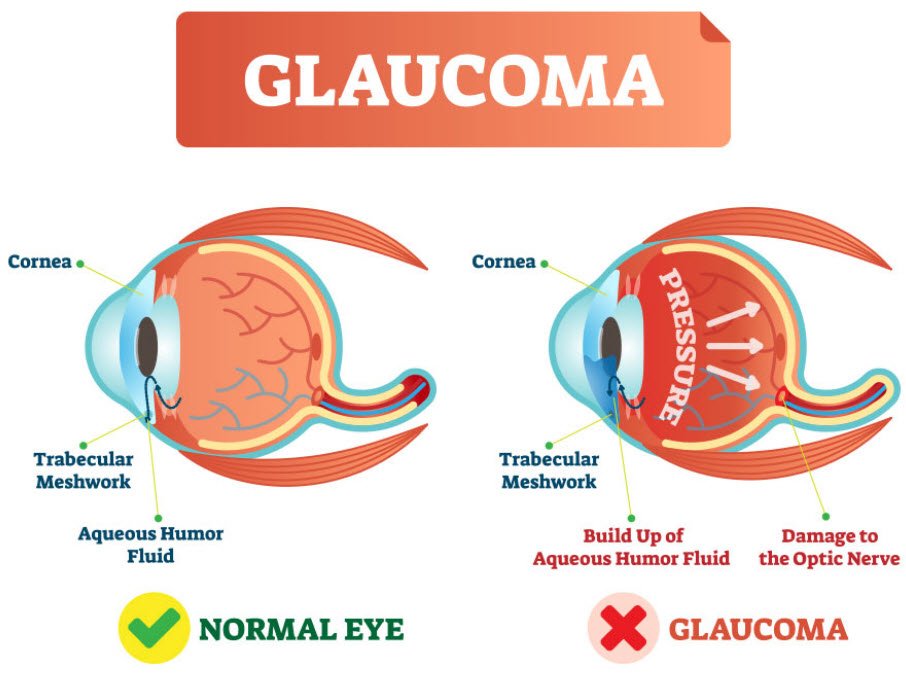 There is a gradual impairment of vision as glaucoma develops, and this may ultimately result in blindness if proper steps are not taken to deal with the disease in the early stages.

Medical science regards severe eye strain or prolonged work under bad lighting conditions as the chief cause of glaucoma. But, in reality, the root cause of glaucoma is a highly toxic condition of the system due to dietetic errors, a faulty lifestyle, and the prolonged use of suppressive drugs for the treatment of other diseases.

Eye strain is only a contributory factor. Glaucoma is also caused by prolonged stress and is usually a reaction to adrenal exhaustion. The inability of the adrenal glands to produce aldosterone results in an excessive loss of salt from the body and a consequent accumulation of fluid in the tissues.

In the region of the eyes, the excess fluid causes the eyeball to harden, losing its softness and resilience. Glaucoma has also been associated with giddiness. sinus conditions, allergies, diabetes, hypoglycemia, arteriosclerosis, and an imbalance of the autonomic nervous system

The modern medical treatment for glaucoma is surgery, which relieves the internal pressure in the eye due to excess fluid. This, however, does not remove the cause of the presence of excess fluid. Consequently, even after the operation, there is no guarantee that the trouble will not recur or that it will not affect the other eye.

The natural treatment for glaucoma is the same as that for any other condition associated with high toxicity and is directed towards preserving whatever sight remains.

If treated in the early stages, the results are encouraging. Though cases of advanced glaucoma may be beyond the reach of a cure, certain nutritional and other biological approaches can prove effective in controlling the condition and preserving the remaining sight.

Certain foodstuffs should be scrupulously avoided by patients suffering from glaucoma. Coffee, in particular, should be completely avoided because of its high caffeine content. Caffeine causes stimulation of vasoconstrictors, elevating blood pressure and increasing blood flow to the eye.

Bear and tobacco, which can cause constriction of blood vessels, should also be avoided. Tea should be taken only in moderation. The patient should not take excessive fluids, whether it is juice, milk, or water, at any time.

He may drink small amounts several times at least once an hour. The diet of the patient suffering from glaucoma should be based on three basic food groups, namely, seeds, nuts, and grains; vegetables; and fruit, with an emphasis on raw vitamin-C-rich foods, fresh fruits, and vegetables. Breakfast can include oranges, grapes, or any other juicy fruits that are in season, as well as a handful of raw nuts or seeds.

A raw vegetable salad with olive Goma oil and lemon juice dressing, two or three whole wheat chapatis, and a glass of buttermilk may be taken for lunch. The dinner may consist of steamed vegetables, butter, and cottage cheese. Certain nutrients have been found helpful in the treatment of glaucoma. It has been found that glaucoma patients are usually deficient in vitamins A, B, and C, protein, calcium, and minerals. Calcium and B complex vitamins have proven to be beneficial for Benetti’s intraocular condition.

Dr. Michele Virno and his colleagues reported at the annual meeting of the Roman Ophthalmological Society in Rome, Italy, that an average patient weighing 150 pounds should be given 7000 mg of ascorbic acid five times daily until he achieves an acceptable intraocular pressure within 45 days.

Symptoms such as mild stomach discomfort and diarrhea from the large doses of vitamin C were temporary and soon disappeared. It has also been suggested that some calcium should always be taken with each dose of ascorbic acid to minimize any side effects of the large dose.

The patient should undertake various methods of relaxing and strengthening the eyes. He should avoid emotional stress and cultivate a tranquil, restful lifestyle. He should also avoid prolonged eye strain, such as that caused by excessive TV or movie viewing, as well as excessive reading.

You may also read: